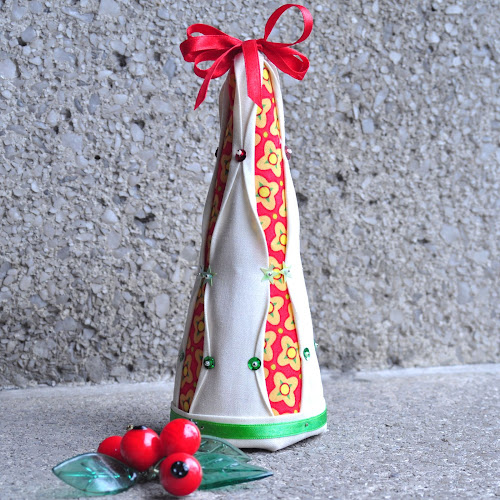 Covering the polystyrene cone
Pin the tree background fabric pattern to the fabric as per picture. 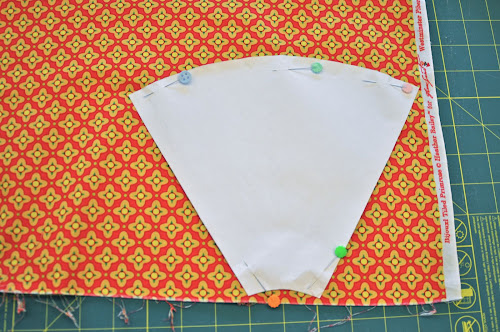 Cut at least 1 inch below the pattern line. The extra fabric will be used to cover the base of the cone. 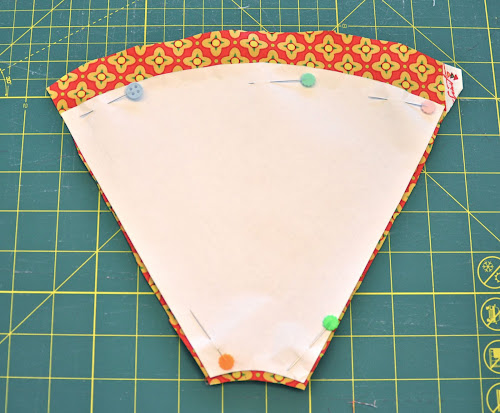 Cover the cone with the fabric and pin on the edge at three different locations as per picture.

Pay attention to the angle of the pin when you insert them near the top of the cone. The pin will need to be at an angle, otherwise you may stab yourself while pinning. 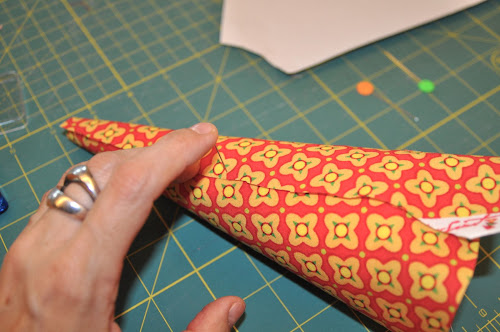 Then cover the base of the cone well, and pin each fold making sure the base is as flat as possible. 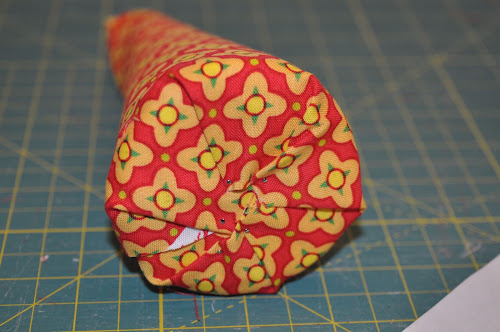 Adding texture to the cone

Cut 4 wedges out of the contrasting fabric. I used white but you could use something more festive such as golden or silver fabric too. 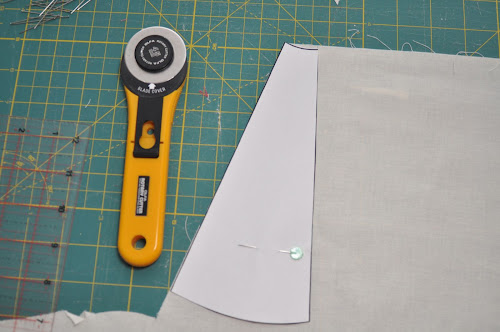 Press each wedge as per picture below aligning both sides of the wedge in the centre. I chose this method instead of stitching the wedge into a tube to reduce bulk in the central seam. 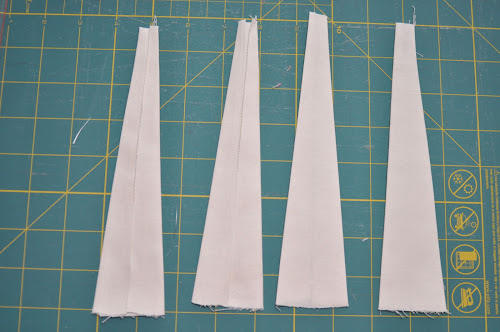 Place the 4 wedges as per picture below making sure they’re evenly spaced apart. Pin on the top. I folded the tops in to make it neater. Don’t worry, the top won’t show. At the end we’ll be adding a bow. 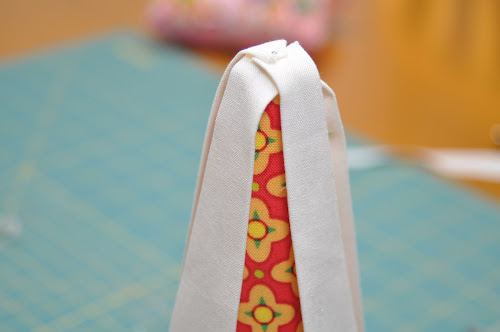 Now pin each wedge on the bottom too. 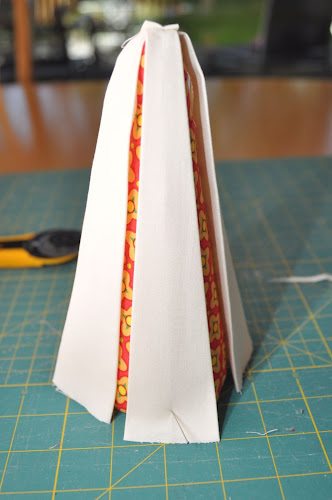 Now mark with a pin where the sequins will go.

Pin at 5 in, 3 in and 1 1/2 in from the bottom folding the fabric inside or out as per picture below. 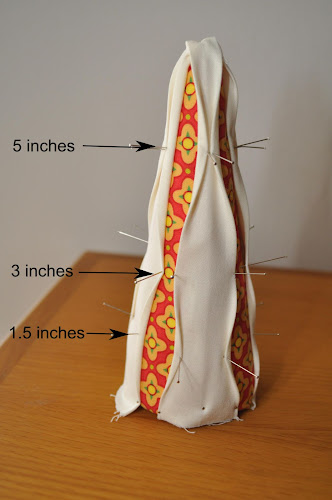 Use two pins for the top 5 in marks rather than pinning both sides of the fabric together.

Now, one by one get a small bead and put it through the headpin, and then do the same with the sequin. Then start replacing the pins in the cone with the sequinned headpins. For the pins at the top you will only need to replace one of them. Make sure that the second headpin is hidden by the sequin (see picture). 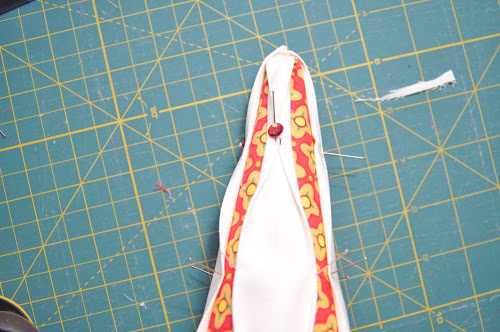 You can be as creative with your sequins as you like. I alternated sequin shapes and colours (golden, red and green) that matched the fabric and the Christmas theme. 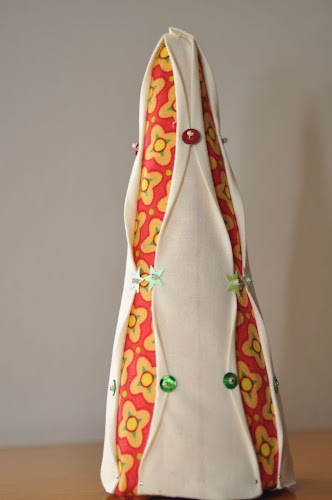 Closeup of the sequins. 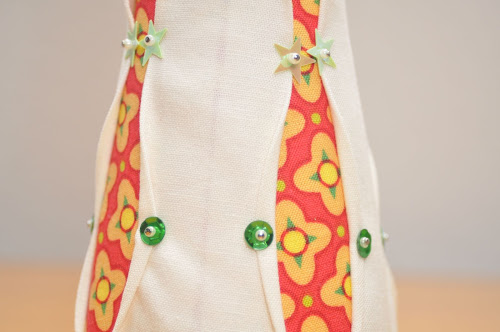 Hiding the raw edges of the fabric

Press the top edge of the rectangle 1/4 in inside and do the same with one of the sides (see picture). 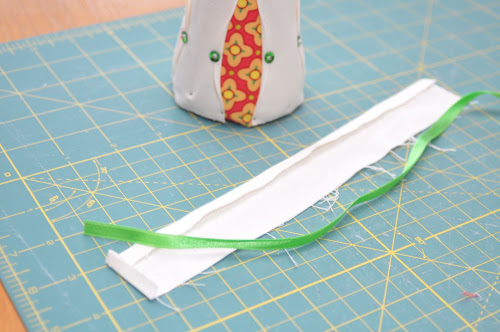 Start pinning around the base of the cone as per picture. 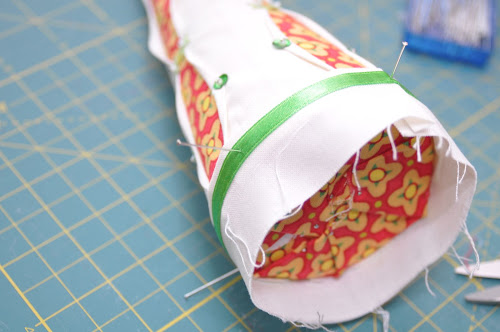 Pin as you go 4 or 5 times. Ensure the ribbon edge is hidden behind the white fabric at the end.

Pin the rest of the fabric to the bottom of the cone as per picture. 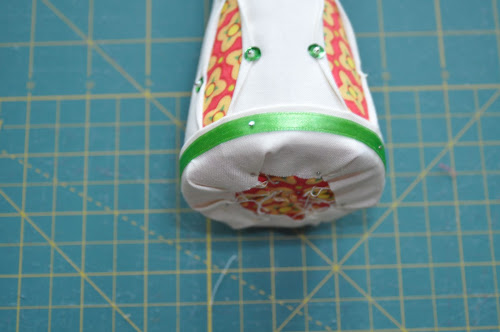 Make a bow with some matching ribbon and pin to the top. 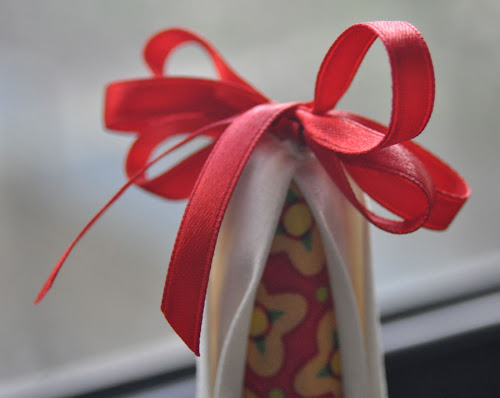 There you have a Christmas ornament in no time at all and without using your machine. 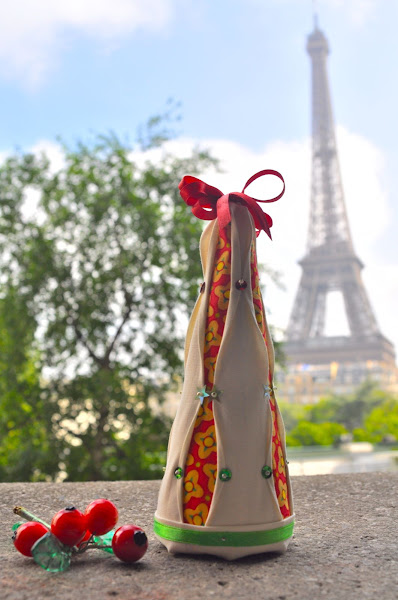