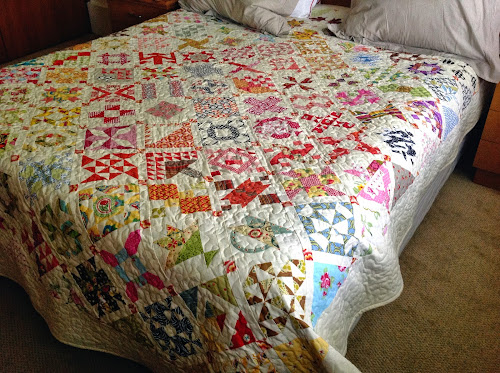 The quilt is finally being used! 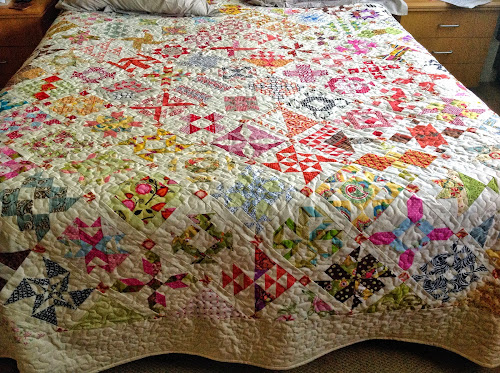 It has taken over 2 years to complete all the blocks in the book and it feels like an achievement for sure. This is the largest and most complex quilt I’ve ever made.

There are some things that I have learnt from making the 110 blocks in the book and which I explain below the ridiculously long graphic with photos of the majority of blocks.

I have spent many hours making these blocks. Some are quite quick and easy to make, others can take 2 or 3 hours.

In which order I made the blocks

Before I started I thought of making the easy blocks first and the hard ones last, or the other way round but then, after looking at the order the blocks appeared in the book I realised that block difficulty was mixed, so I decided to just make them in the order of the book which, by the way, is alphabetical.

I made the blocks in batches. I first cut a handful of them and then I stitched them.

After I had had enough making blocks I put them away for a few days or weeks, even months, while I concentrated on other projects.  My only deadline was to finish the quilt by July 2014.

I only had to make 2 blocks twice though I had to unpick many pieces regularly. I also had to add a small strip of fabric to a couple of blocks which turned out a lot smaller on one side than the 6 1/5 inch square they’re supposed to be.

This quilt has helped me improving accuracy though many of the pieces in my blocks don’t match exactly and I had to press some blocks into submission.

As much as possible I pressed the seams open to reduce bulk.

While I was making the blocks I always had the impression that my blocks weren’t exactly square and that I would have problems putting them together with the sashing. This hasn’t been the case though. Except for a couple of blocks, the rest have been just fine.

I chose to make a scrappy quilt using white as my base colour to add some light and breathing space to the blocks. I used Moda Bella Snow.

While the quilt is scrappy I tried to use some colour scheme for each block such as reds, blacks/grays, greens, or a mix of complimentary colours such as violet and yellow, red and green and so on.

I grouped the blocks by colour starting in the middle of the quilt top with reds and then the other colours around the red with brown and blacks on the outer ring.

The corner triangles are also scrappy. I saw this in another finished FWQS quilt and quite liked it.

Choosing fabrics, making blocks and assembling the top is always my favourite part. And quilting is my least favourite. The arm in my machine is only 9 inch wide so I thought a queen size quilt would be quite a challenge to quilt. It was probably the reason it took me so long to complete.

The quilt was very heavy but overall it was far easier to quilt than I anticipated. My stippling doesn’t look as professional as if it had been made by a professional using a long arm machine but it’s still a beautiful quilt. And I it has encouraged me to make more this size.

Next post I’ll show you my top 10 favourite blocks in the FWQS.